Joseph and Harriet Nute: Was it the Genes?

Just two days after his 17th birthday, young Raymond Nute took a ride with the men of the family on a motor truck vehicle in Fall River, Massachusetts.  It was documented with a photo and perhaps published at the time in the Fall River newspaper.  In any event, the photo was published some unknown years later, likely as a historical photo, and the news clipping recently found in family papers. 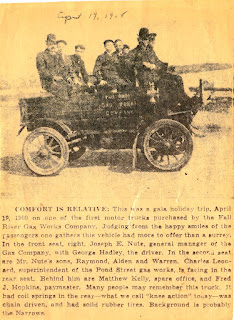 COMFORT IS RELATIVE.  This was a gala holiday trip, April 19, 1909, on one of the first motor trucks purchased by the Fall River Gas Works Company.  Judging from the happy smiles of the passengers, one gathers this vehicle had more to offer than a surrey.  In the front seat, right, Joseph E. Nute, general manager of the Gas Company, with George Hadley, the driver.  In the second seat are Mr. Nute's sons, Raymond, Alden, and Warren.  Charles Leonard, superintendent of the Pond Street gas works, is facing in the rear seat.  Behind him are Matthew Kelly, spare office, and Fred J. Hopkins, Paymaster.  Many people may remember this truck.  It had coil springs in the rear - what we call today "knee action" - was chain driven, and had solid rubber tires.  Background is probably the Narrows.

GGF Joseph Nute was the seventh of Orsamus' children, and second born from the marriage of 2nd GGPs Orsamus and Lovina Dunn Davis. Born in Woodstock in 1863, he was an infant when his oldest half-brother, Samuel Ambrose Nute, died and Orsamus gathered up the family and moved everyone to Boston. Two of Joseph's half sibs died before he was born and another three sibs and his mother would die by 1880.

Joseph graduated from Boston's Massachusetts Institute of Technology in mechanical engineering in 1885.  Fresh out of school, he took his first job in Philadelphia as an engineer for the United Gas Improvement Company of Philadelphia.  Two years later, he married a young music teacher from Boston, GGM Harriet Gove Wilkins, and transferred with his new bride to Jersey City, New Jersey, where he worked for the next three years as superintendent for United Gas and their first born, Helen Elizabeth, was born.   Joseph moved his young family to Fall River in 1890 where he took charge of the Fall River Gas Works Company, and remained in this position until his retirement.

His biography published in Our Country and Its People, Part 2, by Alanson Borden, Boston History Company, relates that Joseph was a member of the American Gas Light Association, the New England Association of Gas Engineers and a recognized authority on all matters pertaining to gas construction.
Harriet was descended from the Gove (of Edward, John and Nathaniel family in Lincoln, MA) and Wilkins families in Boston.
Joseph and Harriet lived in various addresses in Fall River, including 11 Maple Street in 1891, 47 Durfee Street in 1893, 94 Lincoln in 1896, 14 Bedford 1897-1899, and 94 Wilkens Avenue in 1899. Their home at 914 Highland Avenue was completed in 1900, a lovely Colonial Revival. The home is on the National Register of Historic Places as part of the Highlands Historic District.
News articles in Fall River and Boston shed light on Joseph and Harriet's activities while living in Fall River. In 1902, the family took a vacation to South Paris, ME, likely with Orsamus. A fire occurred in a kitchen closet at the Highland Avenue home in May 1904. The news article indicates Joseph and family lived in an apartment on the second floor and another occupant lived in the first floor apartment. A news article in 1909 showed Joseph taking sons Raymond, Alden, and Warren, as well as some officials for a ride in one of the first motor trucks purchased by the Fall River Gas Works. In 1910, Joseph took the family camping at Camp Madockawando. In 1911, a surprise birthday party was given for Warren, a junior at BMC Durfee High School. In 1914, the paper reported Helen and a girlfriend were lost in the woods on Cape Cod.
Numerous news articles relate Joseph's involvement in scouting and civic activities. He was treasurer of a relief fund for a devastating Salem, MA, fire in 1914, as well as treasurer of a WWI Belgian Relief fund drive ini 1914, treasurer for the Chamber of Commerce in 1916, chairman and treasure of a campaign to raise funds for Boy Scouts in 1917, chairman of Fall River's Red Cross War Fund in WWI, a director of the Fall River Chamber of Commerce in 1918, committee chairman for a hospital building campaign in 1920, in charge of a European Children's Relief Fund drive in 1920, and a toastmaster in charge of fund raising for the YMCA in 1921.
The paper also reported Joseph ran over a man who jumped from a trolley car into his path in 1917.

All three boys - Raymond, Alden, and Warren -  and the youngest child, Katharine, were born in Fall River. Their oldest son, Raymond, married Alice Packard Studley in the bride's home in 1915, and the paper notes Harriet wore her own wedding dress to the ceremony. Sons Alden enlisted in the chemical division of the US Army and Warren enlisted in the US Nave with a submarine chaser in July 1918.

Helen (1888-1985) taught on the faculty at Mount Holyoke College and married a student, Arthur G. Wadsworth, in 1917; he was 19 and she 28.  They lived in New Bedford and had one child, Ann, who died at an early age. The newspaper indicated Arthur was a lieutenant in the aviation corps when the couple visited Joseph and Harriet in 1919.

Warren (1894-1960) served World War I in the Splinter fleet, SC 259, a submarine chaser, and worked as a bank clerk after the war.  Working on a World War I submarine chaser was considered to be a pretty hazardous way to spend your time. Warren married Maud Bamford Tattersall and lived in New Bedford, employed as a clerk at the New Bedford Gas and Edison Light Company. Two of their sons fought in World War II, Warren Wilkins II in the Navy, and Gordon Bamford Nute a first lieutenant in the Army Air Corps flew 35 missions over the European theater as a navigator. Warren was cremated at Forest Hills in Boston and is buried in New Bedford.

Alden (1895-1971) graduated from the Massachusetts Institute of Technology in 1917, and married a fellow student, Loretta Dakin, who also graduated from MIT and went on to further graduate work.  An article in a 1920 M.I.T. paper reported,

After graduation from the Toledo Normal School, she came to the Institute and specialized under Professor William T. Sedgwick of the Biology Department in bacteriology and chemistry, leaving in 1918 to take further work at Harvard Medical and Columbia University.

The appointment of women in the health service has been found to be better than filling the positions with men.  The war gave the first impetus to this movement and the women have become more and more prominent in health work.


Alden had a career as a chemist after serving in the army in WWI. He became the assistant superintendent of the cotton company in Fall River, later working for the Calco Chemical Company in Connecticut. Joseph, class of 1885, and Alden, class of 1917, attended an MIT Alumni meeting together in 1923. Alden was cremated at Waring-Ashton in Fall River.

The youngest, Katharine (1899-1933), graduated from the Boston School of Occupational Therapy and was an occupational therapist at the Lakeville Sanitorium for tuberculosis. She lived at home, never married, until her death from lymphoma at the young age of 34. She was cremated at Forest Hills.

Living in the Highland Avenue home in 1920 were Joseph and Harriet, Warren who was working as a bank clerk, Alden working as a chemist in a cotton mill, Katharine, age 20, and a household employee, Susan Simmons.
And, of course, we know about the career of young Raymond who left MIT for Mass Ag to study pomology and created the wonderful orchard in Kentucky.  Such an illustrious group of kids they all were.
Joseph, age 61, retired from the Gas Works in 1924, and became involved in business partnerships, including a partnership with Helen's husband, Arthur, for a dirigible to operate at the South Dartmouth airport. The blimp was destroyed in El Paso in 1932. Joseph was unable to meet his obligations as a private investor in a gas company that went into receivership in 1929.
At age 68, Joseph received Fall River's first silver beaver for his contributions to the Boy Scouts.
Joseph exhaustively researched the Nute genealogy with a distant cousin, Percy Elmer Nute (1884-1965) of Lynnfield, MA. Together, they traced descendants from the original 1632 Nute settler in Dover, New Hampshire. Information was compiled by Amy Emery and put into book form. A copy is in the New Hampshire Historical Society library. His research was donated to the New England Genealogical and Historical Society in Boston and are available on request.
Following Harriet's death May 21, 1941, Joseph, age 77, went to live with Helen and Arthur in South Dartmouth. He died September 15, 1949, and was cremated at Forest Hills in Boston.
Posted by Katharine at 4:18 PM

The appointment of women in the health service has been found to be better than filling the positions with men? LMAO!!